How Old Should a Person Be Before They Have Rhinoplasty? 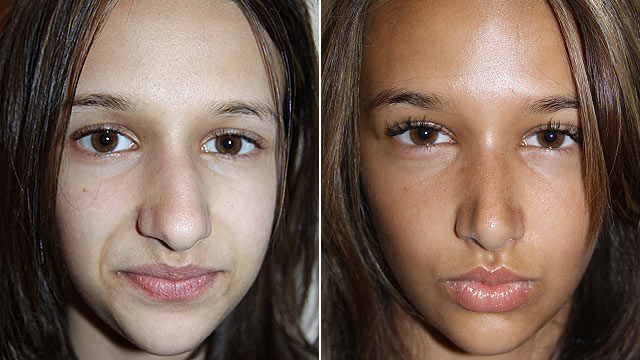 The decision whether or not to receive a rhinoplasty, otherwise known as a “nose job,” is an important one. People have this procedure for many reasons, not all of which are cosmetic. For example, a person might choose to undergo rhinoplasty because they need to widen their nostrils so that they can breathe better. Or, they might want to correct a deviated septum caused by a car accident.

Of course, appearances play a large factor in many rhinoplasties. This surgery can narrow the nose, shorten the nose, or remove unpleasant bumps from the top of the nose.

It is no surprise that many teenagers are unhappy with their appearance. Often their nose is at the center of their unhappiness, and they wish to alter it in some way. So, it makes sense that rhinoplasty is one of the most common plastic surgeries performed on teenagers.

A teenager should not have this procedure until their nose has reached its full size. This usually occurs around age 15 or 16. However, some boys are “late bloomers” who will need to wait until 20 or 21. Some girls may reach full maturity (at least as far as their noses are concerned) at age 12 or 13. If a rhinoplasty is performed before the face has reached adult maturity, the nose might continue growing after surgery is performed. This could make a second procedure necessary to get the look that the patient is striving for.

Rhinoplasty is a relatively minor outpatient procedure, and the patient can usually be in and out of surgery and back home within a day. Still, it does involve going under general anesthesia, which does carry inherent risks. Non-anesthesia-related risks include: nerve damage, swelling, scarring, nosebleeds, numbness and burst blood vessels. So, this decision should not be made lightly. Parents of a teenager who wish to undergo this surgery should have a serious discussion with their child about the risks. They should also make sure that their child is mature enough to make this type of decision. They need to make sure that the decision was well thought out and not made on the spur of the moment.