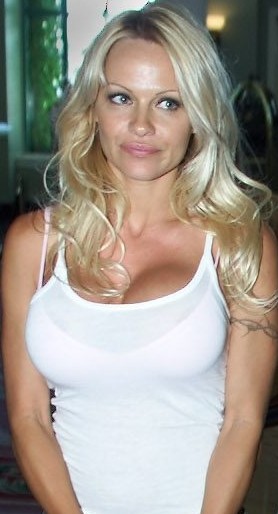 Pamela Denise Anderson is a Canadian born beauty with both US and Canadian citizenship who is famous for her bodacious image. She has worn many hats, though not much clothing, during her years in the spotlight. She is probably most known for her role in the series “Baywatch”. She was also cast as the Tool Time Girl on the hit show “Home Improvement”, but chose to stick with Baywatch due to scheduling conflicts. She has also been a model (most notably Playboy), author, producer, mother, wife and an activist for PETA.

Pamela Anderson started her career when she was discovered at a football game and went on to be on her first cover of Playboy in 1989. She was then chosen as Playmate of the year in 1990 and proceeded to have her first breast augmentation at that time. She had seen the success that other playmates had after having augmentation and wanted to, “level the playing field.” She has gone on to have to hold the Guinness World record for most Playboy covers. She also found success in film and TV since having plastic surgery done. Ironically, Anderson doubled her success and opportunities after choosing to improve her assets.

Pammy shocked the world when she had her famous breast implants removed in 1999. She reportedly wanted her breasts to return to their original state. This diminished cleavage was short lived because she opted to have the implants replaced in 2004. She was reported to have not felt like herself without them. For someone known primarily for her buxum bosom, this is understandable. The new implants are still in place and supposedly bigger than the first set at 36DDD. She was a full C cup before any surgery.

Anderson started a trend all over the world of supersized breast implants. The phenomenon was to boobs what “The Rachel” was to hair in the 90’s. This surge in cup size increase was most notably seen in Australia where plastic surgeons had to specially import bigger implant sizes from “bigger is better” United States sources because-surprise, surprise-it is the only place where the supersized implants are manufactured. Australia surgeons had to import mega size 1000 ml implants because the demand for them was so high, especially for models.

Despite her willingness to have work done in the past, Anderson has stated that she does not wish to go under the knife again. Although she has not admitted it, many people speculate that she has had lip augmentation and possibly a mini-facelift recently. Aging is not easy, and it seems that the blonde beauty will not go down without a fight.